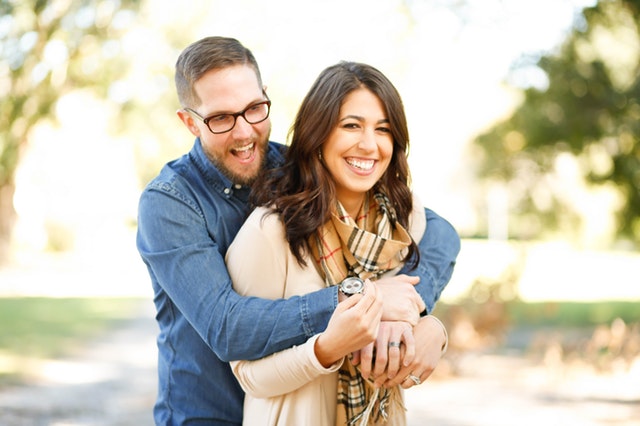 “At least we save money” is one thing you’ll often hear from single people. And there’s a bit of truth in that; you don’t need to buy expensive Christmas, birthday, and Valentine’s Day gifts if you’re riding solo.

However, it’s also important to recognize just how much potential there is to save money when you’re in a couple. In reality, the truth might be that those coupled up people might have cheaper expenses and more options to save than those single folks.

Disclosure: This is a partnered post.  As always, all opinions are my own.

If you’ve been in a relationship for a long time, then you’re probably tied together financially in one way or another. Handled correctly, this can be a great way to get a hold of your finances, and also plan for the future.

One option is to have three bank accounts: one for him, one for her, and a joint account. The joint account will be for savings, and maybe certain expenditures if you have a lot of shared bills. If you usually have difficulty saving money, then get in a relationship: you’ll soon find out if you’re not contributing your share to the pot.

The Art of Cheap Traveling

And now to the fun stuff: traveling. When you’re part of a couple, you have exponentially more options for cheap travel options than people who are single. For starters, let’s think about hotel rooms.

Straight away, you’re spending half the amount that you would if you had accommodation just for one person (for various reasons, ‘single occupancy’ rates really aren’t all that attractive).

And moving away from hotels, you can also just get up and go, and have cheap traveling experiences by setting up camp and sleeping under the stars. Alone, you might not do this, but in a couple? What a romantic experience!

One of the best (OK: “most practical”) aspects of being in a relationship is that you don’t have to splash all the cash on those expensive items just by yourself. A new television? Split that cost. All those cool kitchen gadgets? You’re only paying half!

Then, of course, there’s the car. Some couples don’t need two vehicles, and selling a vehicle that’s surplus to requirements is a great way to raise some capital. Make sure others can drive your car when you insure your vehicle, and then split its use. And bonus: you also won’t end up driving everywhere yourself.  Half of the time, your partner will drive for you!

Of course, the above only really applies if you’re not already living together. If you’re not, then it’s worth thinking about it – though only if you’re ready! Moving in together is the biggest money saving technique of all when it comes to a couple, especially if you live somewhere expensive.

Just think about what you could do with all disposable cash if your rent were instantly slashed in half.  You could also save money on other housing-related expenses, like utilities and trash. If you’re not living apart for any logical reason, it might be time to pop the question!

Cut Those Expensive Subscriptions in Half

The New Yorker, Netflix, Amazon Prime, and so on. All those subscriptions can quickly add up, can’t they? If you were alone, the best option would be to think only about the ones you really want to keep, and then dump the rest.

When you have a partner, you can both just assume responsibility for half the payments. You’ll still be thoroughly entertained, and you’ll also receive a monthly boost: a bank balance that hasn’t been depleted due to all your subscriptions!

Hold Each Other Accountable

Who can be expected to always stay on top of all their finances? It’s not easy, and that’s why so many people have financial troubles. If you have a partner, you’ll be held accountable; there’ll be someone else there on hand to make sure you’re making sound decisions with your money.

It’s good practice to have an open and honest conversation about money. Problems can begin when you start to hide those big purchases from your partner.

Finally, let’s not forget the ultimate money saving technique: cheap date nights! While everyone else forces themselves to get dressed up and spend far too much money in the bars, you’ll be able to have a cheap – or even free – night of entertainment.

People watching in the park, board games and a bottle of wine, stargazing – they’re more fun than being in a club anyway, and you won’t feel any effects on your bank balance.

How do you save money as a couple?

Should You Bring Debt into a Relationship?
Cheap and Fun Anniversary Date Ideas
5 Reasons to Refinance Your Student Loans
6 Picture Perfect Fall Date Ideas
How to Start a Blog in 5 Easy Steps