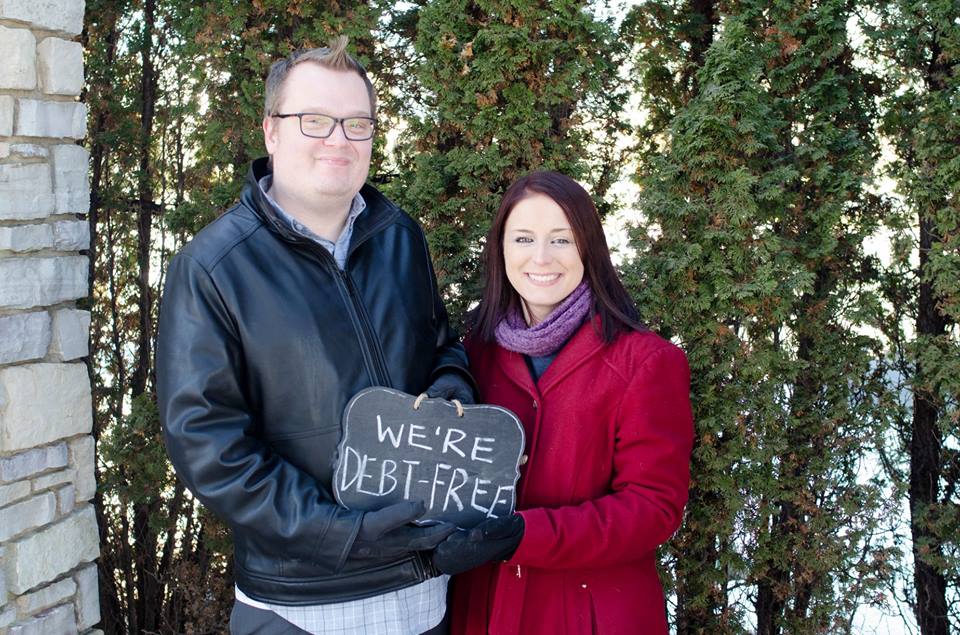 In case you’re new to this little corner of the internet, I post an update every quarter that shows how we’re doing on our debt snowball and other goals.

This helps to hold us accountable and to keep track of our progress.

This update is particularly exciting for me because we have BIG news!

After four years of hard work, sacrifices, and extreme frugality, we are 100% debt-free and it’s an incredible feeling!

If you’re new around here and aren’t familiar with our story, here’s a little bit more about us…starting with the most obvious question.

How did we accumulate so much dang debt?!

The short answer is that we made some dumb choices with our student loans.

I have a master’s degree from an expensive business school and my husband started college at a for-profit private school (he later transferred to a public university). I used my student loan money as an emergency fund and my hubby used his to pay for his apartment rent.

I always knew I would have a lot of debt, but I had expected to be making a high salary with a master’s degree from a highly competitive business school.

After graduating, I was in for a rude awakening. My first full-time job paid so little that nearly 50% of my net income went toward my loans.

We were drowning in debt and neither one of us had any idea what to do…until a money smart friend lent us a copy of Dave Ramsey’s book The Total Money Makeover.

For the first time, I realized that I didn’t need to live a life filled with debt. Like many Americans, I used to believe that debt is a “normal” and inevitable part of life. I decided that I didn’t want to be “normal”.

If you’re willing to make sacrifices and live more frugally than other people will, you can live a life they’ll never be able to live. You know what you can do when you aren’t drowning in debt payments?

Retire early? Travel the world? Pay for emergencies without stress? Give generously?

These concepts seem insane to people who are constantly in debt. Guess what?

These things aren’t at all crazy if you’re debt-free.

What if those people had no debt? They’d free up nearly $2,000 EVERY month! Imagine what could be done with that money.

So, now that we’ve covered WHY we jumped on the debt-free crazy train, let’s talk about HOW we did it…

Paying off six figure debt in a short time frame hasn’t been easy. We’ve made sacrifices, we’ve side hustled, and we’ve been extremely frugal.

The biggest money saver has been living with my parents. We pay them rent but it’s much less than we’d pay for a studio apartment and this has saved us tens of thousands of dollars.

We are so grateful to them and we know that paying off our massive debt in only four years wouldn’t have been possible without their generosity.

Here are some other things we did to pay off our debt ASAP:

It certainly hasn’t always been easy. There have been times when I felt like this was crazy and I just wanted to give up.

I’m glad we didn’t because being debt-free is ABSOLUTELY worth it!

So many people asked us how we plan to celebrate being debt-free. Here’s what we did:

That’s not very exciting, I know. I wish I could we say we’re going on some epic around-the-world trip, but that’s not real life…at least not for us!

Taking a dream vacation makes sense for people in certain situations…like people who already own a home. For us, we want to move out of my parents’ house ASAP so getting started on saving right away is our top priority.

We’re saving up money as quickly as we can for:

Have you paid off debt? What tips do you have for others?

Here’s a sneak peek at a few photos from our debt-free photo shoot!