Paying Off Debt is Worth the Sacrifice + Other Frugal Life Lessons 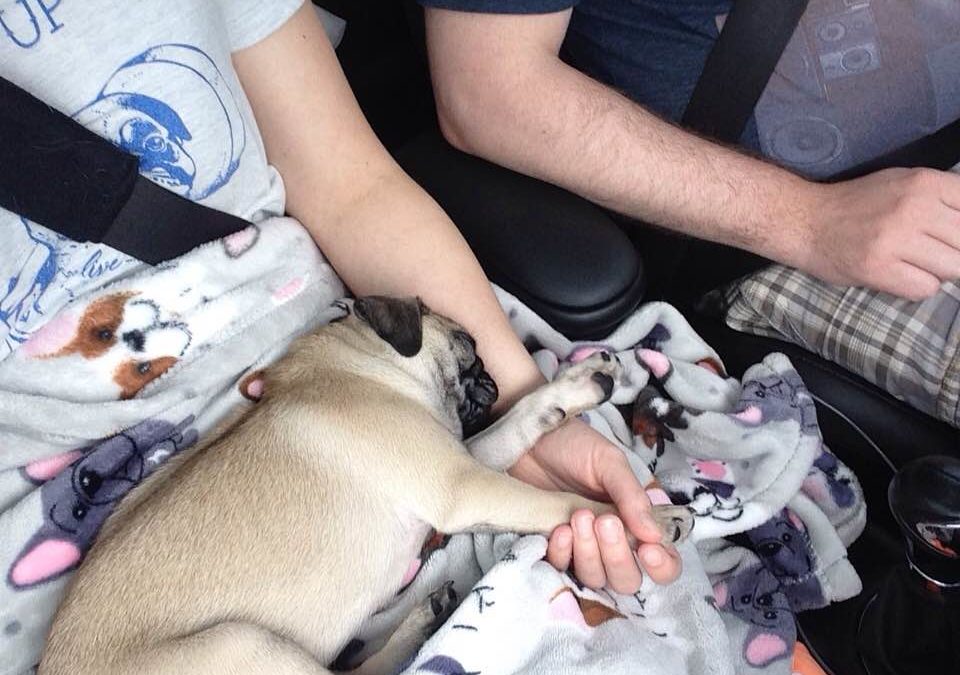 I haven’t shared a life update on this blog in a while, so I think we’re long overdue for one…especially considering all that’s been happening around here!

As you may already know, we finished paying off $127,000 of debt (mostly student loans) about nine months ago.  A LOT has happened since then…both good (actually, amazing) and bad.

The past four months have been filled with life-altering events…some of these changes have been wonderful; others have been awful.

Here’s what I’ve learned during this somewhat crazy season of life.

We purchased our townhome in April, which is apparently the worst time possible to buy a home (especially in a sellers’ market).  The competition for homes was insane and we were outbid more than once.

We put offers on three different homes.  For the sake of being able to discuss them easily, I’ll give them three nicknames (HGTV-style)…Tiny Beautiful, Soaker Tub Perfection, and Big Potential (give me a break…I don’t know how to do this!).

Soaker Tub Perfection was purchased by a buyer who offered more than $10,000 over the asking price…with an all-cash offer.  We had fallen in love with this home and were even more devastated than we were after Tiny Beautiful fell through.

Both of these two homes were gorgeous…think wood floors, amazing kitchens, updated bathrooms, and one perfect soaker tub.  The catch?  They were small…like, really small.

Big Potential, on the other hand, was completely different.  We debated whether or not to put an offer on this house and even considered withdrawing our offer after we had already made it.

The house had numerous drawbacks…renters had been living in it, and, no surprise here, they didn’t take the best care of it.  Every wall had numerous scratches and dings on it, and every single wall in the house was white and would need to be painted.

It was plain, boring, and not updated.  All of the appliances were old and probably the originals that came with the house 17 years ago.

It was obvious that the sellers did the bare minimum possible to prepare this house for sale…because they knew there would be a bidding war anyway, so why bother investing money into updating it?

There were numerous reasons NOT to buy this house…and yet, this house had things we had never seen before in a townhome in our price range.

It had tons of built-in storage, huge closets, a big pantry in the kitchen, a large loft, an adorable exterior, more square feet than Tiny Beautiful or Soaker Tub Perfection, and here was the kicker: it was located in the perfect location.

You know what’s funny?  We weren’t even really sure if we wanted this house but we bought it anyway, and I’m so glad we did.

I’m incredibly thankful that we were outbid on Tiny Beautiful (which was gorgeous, but way too small for us) and Soaker Tub Perfection (which was in a MUCH less desirable location).

The house we weren’t sure that we wanted became our beloved, much appreciated home.  We love living here and I’m thankful every day for this home… it wasn’t where we imagined living, but it turned out to be perfect for us. We’ve already painted the walls (gray) and the trim (white) on the main level of the house. Eventually, we’ll paint upstairs and make some changes to the kitchen, flooring, and bathrooms.  We can make plenty of updates over time.

If you’re house hunting, remember that you can make updates to a home, but there are certain things that can’t be changed (like the size, if it’s a townhome, or the location).

Don’t ignore a house that may be dull and plain.  If it’s a good size for your family and it’s in a great location, it might have plenty of potential.  You never know!

Frugal Lesson Learned: Sometimes it’s okay to spend the same amount of money on something that’s less “nice” than another option.  Even if it’s not what you expected, it may have potential.

When One Door Closes, a Better One Opens

“Sometimes not getting what you want turns out to be a wonderful stroke of luck.”

We were SO disappointed when we were outbid on Tiny Beautiful and Soaker Tub Perfection, but this turned out to be good luck.  I love the home we bought and couldn’t be happier with how things turned out. Both were nice enough (certainly a huge upgrade over the 2000 Oldsmobile), but they had some scratches and one of the vehicles had significant damage to the trunk from a previous accident.

We tried to buy both of them anyway, and ended up backing out after third party inspections found a laundry list of issues (around $2,000 in necessary repairs for each car).

We also looked at a 2016 Kia Rio, which had less than 30k miles on it and seemed like a great deal online…until we saw it in person and realized that it had roll-up windows and manual locks.  Even my 2000 had automatic locks and windows!

Anyway, we were starting to feel disappointed, discouraged, and frustrated.  We had thought that $10,000 would get us a pretty nice used car, but that just didn’t seem to be the case and we wondered if we’d have to up the price.

When we found the Ford Fiesta, we were amazed.  The prior owner clearly loved this car and took excellent care of it.  Both the interior and exterior were in immaculate condition…we couldn’t even find a single scratch on the entire car!

In addition, it had an amazing sound system, a back-up camera, and all sorts of bells and whistles that the Cruzes and Kia didn’t have…even though those cars were just as expensive!

I didn’t want to get my hopes up until we had Ruby inspected.  But there was no need for concern; the inspection came back spotless!

Again, when one door closed, a much better one opened.  Patience isn’t my strong suit…but its importance is clear.

I can’t tell you how many times this lesson has played out in my life.

The next time you’re rejected for a job, a potential relationship, a house or car (or something else you’re trying to buy), keep in mind that you’re not really being rejected… you’re just being redirected toward something better.

Frugal Lesson Learned: Don’t be too disappointed when you lose out on some kind of opportunity.  Remember that something better is probably on its way!

…And if it’s something that involves spending money, it’s a good idea to find the best possible deal for your cash anyway, which might require some time and patience.

I’ve mentioned the idea that “problems are forever” (which I got from Natalie Bacon’s Design Your Dream Life podcast…side note: it’s amazing; go listen to it) before.

My husband told me that he thinks this sounds super depressing.  It’s funny because the concept that “problems last forever” is actually supposed to be great news!

Most of us have this misconception that as soon as we achieve whatever goal we’re working on, we’ll magically become happier people.

If we could just lose the weight, get a promotion, find a better boyfriend, move to a nicer neighborhood, get a snazzier car, have more money…whatever it is, we think we’ll finally be happy once we get it.

Even the most wealthy, successful, famous people still have problems.  Paying off debt and getting your financial life together is an admirable goal and I strongly encourage you to go for it.

Just don’t lie to yourself and pretend that you’ll be happier once you have more money.

I have everything I’ve ever wanted: freedom from student loans, a house I love, a great car, a husband who’s my best friend, a good job, two adorable pugs…and I’m not any happier than I was before I had those things.

Because happiness isn’t determined by your circumstances.  It’s created by your thoughts.

There is no place you can arrive at in life that will be problem-free, no matter how much money, security, success, and love that you have.

This is GOOD news because it means that you can give yourself permission to be happy right now instead of waiting until your circumstances improve.

Check out the amazing Life Coach School Podcast (by Brooke Castillo) to learn more about how to feel better by managing your mind.

Frugal Lesson Learned: Paying off debt is worth it because it improves your finances and gives you the ability to do things you can’t do when you’re broke (like traveling, retiring, giving generously, buying a house, etc).

Focus on that instead of focusing on how much happier you’ll be when you’re debt-free…because you won’t be happier.  If you want to feel happy, take a look at your own mind instead of the circumstances around you.

Instead of Resistance, Try Acceptance

Repeat these three sentences with me:

Are you wallowing in regret about your difficult financial situation?  Byron Katie says that “When I argue with reality, I lose, but only 100% of the time.”

I’m not saying that you should give up on trying to improve your reality.  Instead, work on changing your future but accept what the present contains.  The past is over and done.  You can make it mean whatever you want it to mean.

I choose to see my student loan debt as a positive thing because that debt inspired me to start reading personal finance books and blogs.

I completely shifted my mindset about what “normal” looks like and I’m finally making intentional decisions with my money.

Accepting the past makes more sense than resisting it because you have no control (in the present) over what happened in the past, and resisting it will only make you feel miserable.

Acceptance is a helpful tool in many other areas of life outside of personal finance.

Whether it’s grief, bad news, a mental illness, a difficult diagnosis, or anything else you don’t have control over, you will find some peace if you accept it instead of resisting it.

“Whatever the present moment contains, accept it as if you had chosen it.” -Eckhart Tolle

Frugal Lesson Learned:  Change what you can (and want to) change, and accept what you cannot change.

This has been the most change-filled season of my entire life.  It’s been a little crazy, but I’m thankful for the many blessings in my life and I’ve learned a lot along this journey.

What’s new in your life?  What lessons have you learned lately?  Share in the comments! :)