The Top 10 Best Board Games for Adults 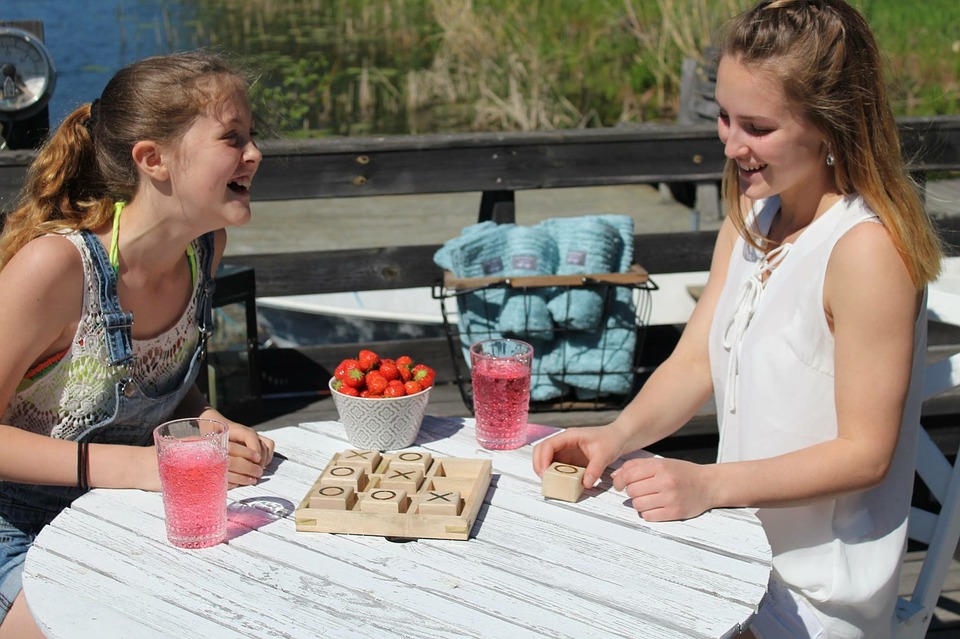 My hubby and I love to have board game nights with our friends.  We’re currently on a three year spending ban while we pay off our massive student loan debt, so finding free things to do for fun is important for our sanity.

In addition to being free, game nights are so much fun.  Honestly, I have a much better time staying in and playing games with friends than I would if I went out and spent a bunch of money.  Here are my top ten favorite games for a board game night.

If you want a game that will keep you laughing all night long, try Telestrations.  It’s essentially a combination of Telephone and Pictionary (don’t worry if you’re terrible at drawing – that’s what makes it fun).

One person writes a word, the next person draws it, the third person guesses what the drawing is, and the cycle continues.  At the end, everyone can see what word they started with…and what it became.  It’s hilarious to see how much changes by the time you get to the end. For Catch Phrase, a group of six players would split into two teams with three players each.  One player takes a handheld device (which has a word on it) and gives the other two players on his team clues to try to guess the word.  For example, if the word is “river”, he might say “long body of water”.  He can use any words to describe it (as long as he doesn’t say “river”), but can’t use any kind of gesturing. In Hedbanz, everyone wears a headband with a word on it (each person is not allowed to see the word on his/her headband).  The players each take turns asking yes or no questions to try to determine what word is on their headband.  It’s entertaining to see what some of the guesses are. Cards Against Humanity is the “party game for horrible people”.  You need to have a twisted sense of humor to enjoy this game.  It’s essentially a dirtier, more politically incorrect version of Apples to Apples.  I don’t recommend playing this game with anyone who’s easily offended.  If your friends are okay with disturbing humor, they’ll love this one. This might be my #1 favorite game.  One Night Ultimate Werewolf comes with an app and a deck of cards.  (The app narrates the game and tells the players what to do).  Some of the players are werewolves, while the rest are villagers or other characters. The Voting Game begins when the first question card is revealed.  The question could be something like, “Who would survive longest in a zombie apocalypse?” or “Who would lose an election because of something they did in high school”?  Each person votes for the player who they feel is best described by the question.  This game is a great way to get to know people and it leads to some interesting stories. Say Anything starts with “the judge” selecting a card and asking one of the questions from the card.  The question could be something like “Who’s the most annoying celebrity?” or “What would be the coolest thing to teach a monkey?”  All of the players give an answer and the judge votes for his/her favorite answer. Scattergories is an excellent choice for anyone who enjoys word games.  A die is rolled which displays a letter.  Each player is given the same list of categories and must think of a word that starts with that letter for each category.

For example, if the letter is “A”, and the category is fruit, someone could put “apple”.  Most of the time, it’s much more difficult than this, so it takes some creativity to come up with answers. Loaded Questions begins with one person reading a question from a card.  Some example questions are: “Which TV sitcom family would you want to be a part of?” or “If you were invisible, where would you go?”

Each player answers the question anonymously.  Next, the player who read the card reads the answers and guesses which player gave which answer.  It’s fun to see how well the players know each other. Dirty Minds is the “world’s cleanest dirty game.”  The game involves listening to a list of clues and guessing what the word is.  The clues are filled with double entendres, so they sound inappropriate, but the answer never is.  For example, the clue “I can only get laid once” has the answer “egg”. What is your favorite board game?

Looking for other frugal things to do for fun?  Check out: